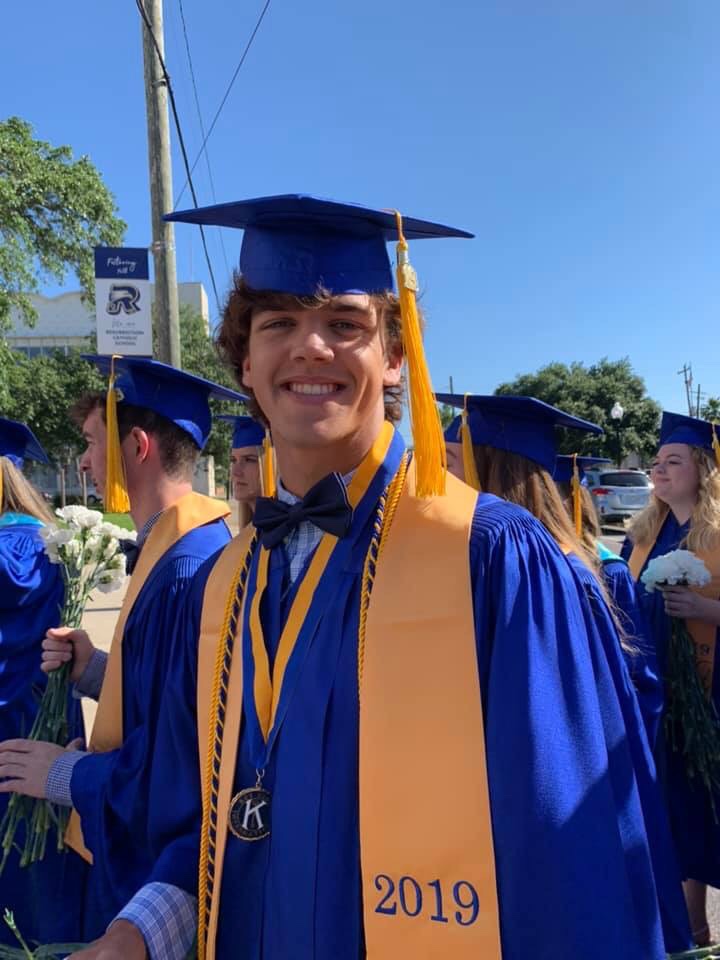 When I have writing material by 7:07 am, it’s on. And I mean that in the nicest way possible. This is never more true than the morning of a major life event. Speaking of which, I seem to write about “functions” quite often. This would include Christmas, Mardi Gras, and high school activities. It’s like Peggy Post meets Erma Bombeck (look them up if you must). Is this a blog or a social column in the paper? Anyway, back to writing material. Seven in the morning is a little early to be inspired.

Let me clue you in first. My children attend the Catholic school where I teach. It’s a small school, and a very sweet school. We fit in fine (even though we’re Baptist). There is a special Mass held for the senior in which students and teachers get up to speak about each graduate. Our daughter, who is a freshman, spoke on behalf of our senior. I cried and was so proud of both of them. This isn’t graduation. That comes on another day. Such a special service requires much work for the teachers. We are very appreciative to all of them.

Parents work hard to help their seniors get to this point, as well. Doesn’t it seem like if something is going to happen, it happens on important occasions? No? Well, aren’t you lucky😂? I was nervous for our daughter, so I didn’t sleep well the night before. Y’all. What I saw in the mirror that morning was ROUGH. I would say it, but I’m a Christian. The bags under my eyes were just awesome. I’ve got a cream for that, though. No biggie.

The next wonderful event was putting on my dress for Mass. I was SO excited because it was last year’s Easter dress. I thought I was so fortunate not to have to go shopping for a new dress. Something felt “off” when I put it on. As I turned to look at the back, I figured out what it was. It had shrunk SEVERAL inches. My hair was wet, I had on no makeup, had to dress the baby, and had forty-five minutes until time to leave. “What do I wear?”, I thought. I put on the same outfit I had worn to awards night only a few days earlier. The horror! Are Southern women even allowed to do that?

Time to get the baby ready. I went to take him out of his crib and his left leg CRUMPLED under him. This happened several more times. I was thinking he had broken something. It was awful! He kept walking and falling. As this was happening, my older son called and informed me he was missing his graduation stole. The baby’s leg started “working” again ( he had slept on it funny) and our older son found the stole (which was at school and he kept saying I had).

I got the baby to daycare and made it on time to Mass. It turns out that I was actually early. The rest of the day was filled with laughter, tears, and many memories. Looking back on the day, I had to laugh (especially at the undereye bags and my “inappropriate” dress). Honestly, I think that the stressful moments make the special ones even more special. We can remember the work it took to get there and appreciate the journey. So my advice to anyone attending a senior Mass is to get enough sleep and try on your clothes the night before the big event. Oh, yes…. take plenty of tissue. You’ll need it.